Well it's finally here!  The Fly Fishing Show is coming to New Jersey this weekend.  The show is taking place this Friday, Saturday and Sunday at the Garden State Convention Center in Somerset, New Jersey.  Show hours are Friday 10 - 6,  Saturday 8:30 - 6:00 and  Sunday 9 - 4:30.  These shows take place across the country but the New Jersey show is one of the largest.  I love these events for now other reason than to catch up with old friends.  I can barely make it down an aisle without bumping into someone I know.  If you can make it out to New Jersey this weekend I highly recommend this show.  If you live in the tri-state area you have no excuse not to attend.

I will probably be there all three days.  Being the president of Central Jersey Trout Unlimited,  I will be spending a good deal of time at our booth in the lobby.  Stop by and say hello, if I'm not there the fellows at the booth will likely know where I'm at.   I hope to see you there!
0 comments
Labels: events 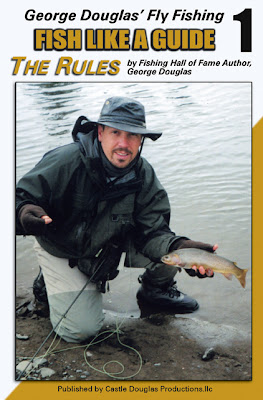 The folks over at Kype Magazine recently sent me a copy of George Douglas' new book Fish Like A Guide.  George is the publisher of Kype Magazine.  Kype is a quarterly magazine with distribution throughout the USA and Canada. You'll find it on the news-stands of major book stores and other retail outlets, including sport and fly shops across the country.

I look forward to spending some time with this book over the next few weeks.  George shares his insight as a guide to make you a better fisherman.  From my own experience a good guide can take years off the learning curve for novice fisherman.  Even now with over 35 years of fly fishing experience, I still learn something every time I fish with a good guide.

As I stated earlier I just received the book but I'll come back to it when I'm finished and give everyone a full report.  In the meantime if you would like to check a copy for yourself you can find it here.
2 comments
Labels: books

The Generosity of Others

Kevin Comptin is a incredible fly tier I have had the pleasure of meeting several times over the years.  I have incorporated many of his innovative designs and tying techniques into my own fly tying.  Unlike some in the industry he is always willing to share ideas and help others better their fly tying.

Right before the holidays I had the opportunity to speak to him over the phone.  We spent almost an hour discussing fly fishing and fly tying.  During the course of that conversation he commented on a pattern I had posted last month.  He observed that I got the pattern close but was a little off on identifying some of the materials.  He graciously explained his exact tying methods as well as providing a detailed description of the materials used.  While speaking to Kevin at the Fly Tying Symposium he handed me the fly fresh out of his vice simply saying "give this a try".  The fly looked very promising so I set off to recreate it the best I could.  Since Kevin never told me the name of the fly I was left to my own devices to give it a name.  This was the pattern dubbed the "Copper Bead" by a friend due to it's prominent oversized copper tungsten bead.  I have fished the fly every time I have been out since tying them up and it has been a top producer. 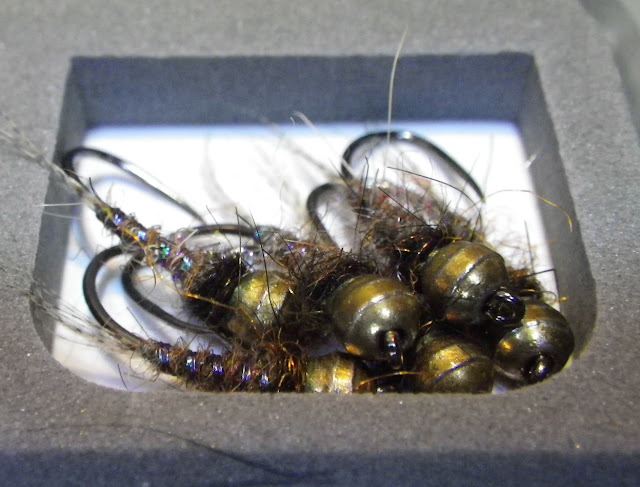 I am happy to say that I now have the pattern's proper name and the exact pattern recipe.  In fact Kevin was kind enough to send me a sample of the tungsten wire dubbing brush as a well as a sample of the actual dubbing used to create the body.

As I mentioned earlier I was a little off in the material selection when I recreated this pattern, but the version I tied proved quite effective none the less.  I am very pleased that I will now be able to reproduce the pattern as it was meant to be tied.  Though, as Kevin pointed out, all of this business of exact patterns doesn't amount to a hill of beans.  It's all about sharing information; be it fly patterns, new materials or innovative techniques.  As Kevin eloquently stated in a recent correspondence "In the wild end, it's friends, not fish, that matter.", true words indeed.

So with out further rambling...


The Brush Hog as it was meant to be tied:

If you plan on visiting the Fly Fishing Show in Somerset, NJ next week stop by and check out Kevin's table, you won't be disappointed!  If your looking for the DOHIKU hooks Kevin is the only supplier I am aware of you can grab them at his site Performance Flies.
4 comments
Labels: fly tying

This is a project I have been thinking about for a while now.  I do a fair amount of fly tying on the road.  Several times a year I participate in fly tying demos for my local TU chapter. I am also involved in teaching fly tying for the same organization. Then there are the fishing trips; anytime I fish more than a day's travel from home I usually pack some sort of tying kit. More than once, a tough day's fishing has been saved by a pattern tied in camp or cabin the night before to match some local bug.

Until now, the game plan usually consists of throwing a bunch of materials and tools in some sort of container and calling it done.  What happens more times than not is I'll settle in to begin tying and realize I have forgotten the ribbing material, the dubbing or some other critical component I need to complete the pattern.  For now I am planning to build this kit around trout patterns since this is the fish I pursue most often.

My plan is to stock the kit with materials and tools and leave them there. Lord knows I have accumulated enough materials and supplies over the years to do this without a problem. I may need to pick up a few items but for the most part I should have everything I need in my current stock of supplies.

I was fortunate to receive not one but two Fish Pond tying kit bags for Christmas this year.  The Road Trip bag is a compact solution that will require careful consideration to what goes inside.  The Tomahawk bag is the everything but the kitchen sink approach to a portable kit. I am still on the fence about what approach to take when I put this kit together.

I want to design the kit around the Marco Polo kit I picked up last year.  That should take care of the vice and most of the tools the only question is what materials to stock.

I will post more on the subject, including the final inventory when I finish putting it all together. I'll even try to put up a review of the two Fish Pond bags as the look like they both are perfectly suited for the task.
3 comments
Labels: fly tying 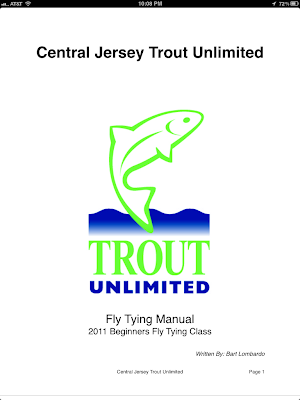 It's been quiet around here lately because I started a project a few weeks back that has morphed into something quite unexpected.  Our TU chapter runs a six week fly tying course every year.  As one of the instructors I thought I would put together a little pamphlet reviewing some of the patterns that would be covered in the beginners course.
That "pamphlet" has turned into a 100+ page Ebook containing detailed tying sequence photos, and tons of information that would be useful to the beginner tier.  I have enjoyed the process of writing it and I am pleased on how it is turning out.
I am on the tail end of this endeavor so please bear with me, things should get back to normal in a week or two.
I also want to apoligize for all the missing photos on the blog.  Apparently there is some sort of bug with the iPad Blogger app.  I lost all of the photos associated with blogs posted from the iPad.  Hopefully I can get the issue resolved.
0 comments
Labels: fly tying, rambling

Wishing everyone a happy, healthy and prosperous new year!