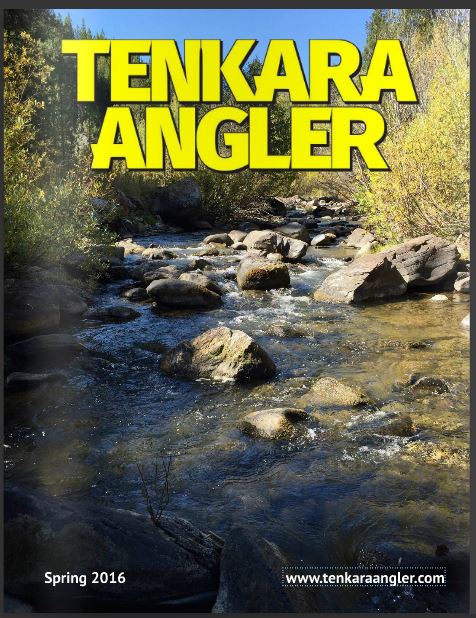 The Spring 2016 edition of Tenkara Angler has hit the virtual newsstands.   This edition contains one hundred and twelve pages of tenkara goodness.  The magazine covers a broad range of topics with articles on fishing, fly tying, casting techniques, destinations, as well as other subjects such as art, interviews and camping.   As tenkara has taken hold here in the United States, I have seen the use of the technique expanded far beyond the coldwater mountain streams where it originated.   Over the years, it has become one of my favorite ways to pursue panfish.  In fact, you can find an article authored by yours truly in this edition.  The article, entitled Springtime Crappies, illustrates just how effective tenkara techniques and equipment can be on warm water fish.  You can check out the magazine for free by clicking here.
0 comments

Shad - How to Find Them

In continuing the posts on the upcoming shad season, I thought I would share what I know about locating the fish.  Shad are different from most warm water fish I target since they are anadromous. This means they spend the majority of their lives in salt water, returning to fresh water to spawn.  They are only available to anglers for a short window of time and during this period, they are always on the move.  What was a productive spot one day may be a waste of time to fish the next.

First a little about the fish themselves.  When I refer to shad, I am, in fact, referring to American Shad, not to be confused with the slightly smaller Hickory Shad.   Both species may be present at the same time in some watersheds.  Shad are members of the herring family.  These fish spend the vast majority of their lives in salt water, returning to freshwater to spawn, much like salmon.   It is interesting to note that many shad survive spawning and return to the ocean in the northern part of their range.  When I refer to freshwater, I mean rivers.  Although the historical range of the American Shad has been reduced due to dams and pollution, shad can be found in most major river drainages along the eastern seaboard including Florida and Nova Scotia.    Originally native to only the east coast, shad were transported to our western shores in the 1800's where they took to the Pacific Ocean like a fish to water.  West coast runs of shad in some rivers may, in fact, be larger than runs in their native rivers back east.

A female shad is typically larger than males.  Their average weight is 3-6 pounds, but they can run quite a bit larger.  The current IGFA all tackle record is a hefty 11lbs 4oz.  Male shad typically range in the 2-4 pound range.  Shad are feed mostly on plankton like other herring, but they have been known to consume shrimp, small fish and fish eggs.  It is puzzling why shad readily take flies and other lures, being the plankton feeders that they are.  It could be out of aggression or perhaps simple curiosity.  Fortunately, we don’t need to worry about why they hit flies, just be confident that they do.

When shad enter freshwater, they are doing it for one reason, and that is to spawn.  Depending on where you are located this can occur anytime from late winter to early summer.  In my area, the major fishery is the Delaware River.  In most years the fish are in the rivers in catchable numbers by late March.  Once in the rivers, the fish are constantly on the move towards their spawning grounds which could be hundreds of miles upstream and into tributaries along the way.

Shad tend to orient themselves to the river bottom, sticking close to it as they move or rest in the river.  They often tend to stick to river channels, but occasionally can be found in shallow water.  Shad also tend to congregate behind obstructions in the river, using the break in the current to rest before pushing up the river.  Shad gather in schools in the marine environment, so if you locate one fish, you are likely to connect with more.  In the rivers, shad behave differently than they do in salt water in regards to forming schools.  In freshwater, a school of shad is more likely to be a long narrow line of fish opposed to a dense school.  They move upstream in conga line fashion instead of a large pod of fish.

If your are trying to locate shad, you need to keep these facts in mind.  You are going to need to present your fly in a manner that it gets down in the water column, real low, just over the bottom low.  You will probably have more success if you can locate structure in the river that will provide a break in the current if you are looking for a concentration of fish.  Keep in mind that these fish are on the move constantly so you may find them anywhere.  Finally, you want to be able to reach the main channel with your cast as the fish tend to seek out the deeper water of the main channel more often.  Find a location that gives you one or more of these features and you're likely to catch shad if they are there.
0 comments
Labels: shad

The Shad are Nigh


I am starting to hear reports of shad caught in the Delaware River.  Their numbers over the last few weeks have been on the flat side indicating that the run has not begun in earnest, but it should not be long now.  I friend of mine was on the river last week and reported the water was lower than it should be at this time of year.  Low water will have an effect on the run.  A flush of water should encourage the fish to begin their upstream push.  With some wet weather in the forecast perhaps we will see some better numbers caught.  I know most anglers pursue shad with a spinning rod, and there is certainly nothing wrong with that!  If you have never fly fished for shad, I highly recommend it.  The fish eagerly take flies and fight like hell on a six weight rod.  I am a relative novice when it comes to fly fishing for shad having fished for them for only a few years.  In any case, I am happy to share what I know.

The most challenging part for me has been finding sections of the river that are suitable for fly fishing.  With fly fishing, an open bank for unobstructed backcasts is necessary, unless you are going to employ spey gear.   Being able to reach the main channel give you access to more fish as they tend to concentrate there.  With the limited casting range of a fly rod (compared to a spinning rod) the channel needs to swing close to the shoreline your fishing.   On the Delaware River, spots that meet these criteria are few and far between, especially if you don’t want to interfere with the efforts of other anglers using spinning tackle.  That being the case, I need to keep specific locations to fish close to the vest.   I’m going to leave finding a place to fish up to you, but that’s half the fun.

As far as rods go, I have been using a nine foot six weight for most of my shad fishing.  Since you are throwing shooting heads with fast sinking or intermediate lines, a fast rod with a bit of backbone helps to cast this setup.  When the water is high, I will often switch to a seven weight nine feet or longer.  Late in the season, I may drop down to a five weight and may even use floating lines.  When fishing with shooting heads, a stripping basket of some type is mandatory equipment.


The flies are very simple to tie with bright and flashy being the norm.  It takes a bit of experimenting to dial in on a retrieve that the fish find appealing.  In most cases a fast, steady retrieve is what the fish prefer.  A two handed retrieve with the fly rod tucked up under your arm usually does the trick.  If you are a saltwater angler, you know the drill.

I hope to report more in the weeks to come and plan on sharing more information on gear, terminal tackle and fly selection so stay tuned…

The folks at SmithFly have just launched a new Kickstarter campaign for a waterproof backpack.   I love waterproof packs and bags and have been using a few different makes and models over the last few years.  I need another bag like a hole in the head, but a molle compatible dry pack, that will except a holster?  Those familiar with my pre-retirement life know this one will be hard to resist!

At the time of this writing, there was a great early bird deal on these bags.  Fifty percent off retail price!  There are only a hundred available at that price, so get them while the getting is good.  You can find the project here.
0 comments

Panfish On The Fly 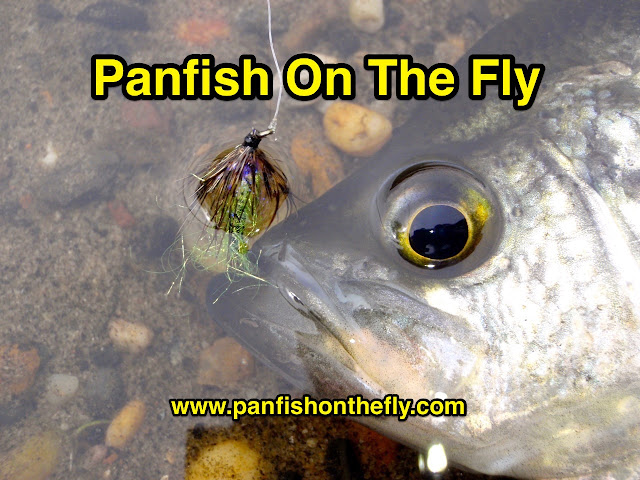 I recently launched a new site that will focus on warm-water fly fishing. The site is still under construction, but most areas are up and running. There is new content added several times a week. Stop by and check it out. You can find it at www.panfishonthefly.com
There is also a facebook page by the same name https://www.facebook.com/panfishonthefly/
2 comments 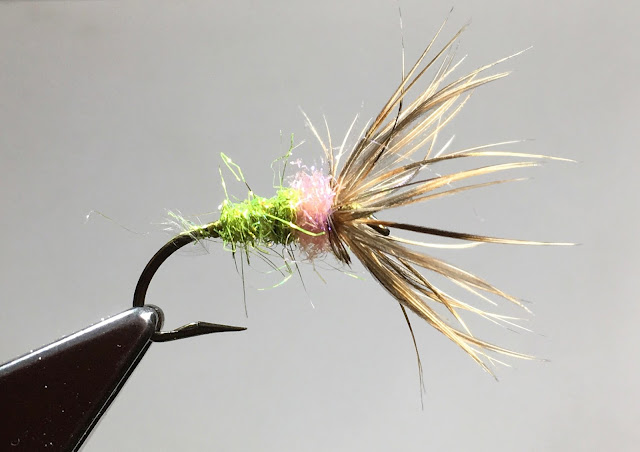 Tenkara has become my favorite way to fish for Crappie and other panfish.   I have converted one of my favorite, brightly colored soft hackles into a reversed hackle, kebari style fly.  I have had quite a bit of success with this pattern over the last few seasons.  Sometimes it performs a little better, other times the fish prefer the pattern tied as a traditional soft hackle.  On a tenkara rod this one feels right.

Hook:  Standard wet fly ( the one pictured is an old, no longer made Mustad with a wicked barb)

Thread:  6/0 Uni your choice of color