Feather Craft Fly Fishing has started up another gear giveaway.  This month they are giving away SUMO Rod Mounts for two lucky winners.  This is an excellent opportunity to throw your name in the hat for some fine new gear! 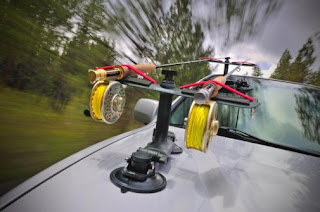 The only affiliation I have with Feather Craft is that I have been a long time customer and I just happened to be one of the winners in their last giveaway. So the least I could do is give them a plug.

I ended up with a $100.00 gift certificate.  I was shocked when I received the e-mail that I was a winner.  If I can do it so can you, all you need to do is drop your name (and e-mail) in the hat.  Just click on the banner above or the link below and visit their site!

One of my favorite soft hackles is the classic Woodcock and Hare Lug.  Over the years I have fished a lot of soft hackle and hare's ear patterns.  Whether its tied with the classic silk abdomen and dubbed thorax or a complete body of hare's ear dubbing, both styles have worked well for me.  I inadvertently experimented with this old stand by of mine today.    While tying this afternoon,  I became distracted by my three year old and grabbed a package of spiky squirrel dubbing instead of my usual hares ear.  The yellow silk that was intended for the abdomen became the ribbing and was also exchanged for wire for a little extra weight on flies that will not be fished in the film.

Granted simply changing dubbing is not a huge departure from the norm, but I really like the way spiky dubbing on these soft hackles look, they will definitely catch em...
4 comments
Labels: fly tying, soft hackles, wet fly

The world of fly fishing and fly tying has lost another great man, Dick Talleur.

"Richard W. Talleur passed on Friday February 18, 2011, after a brief illness.  Originally from Clinton Corners, NY, Dick enjoyed a long career with AT&T.  After retiring from AT&T, Dick took his favorite hobby and first love, and made it his life.  Dick was an accomplished fly tier and fisherman, and a well-known and respected author of several books on fishing and fly-tying.   Dick loved his sport and, with his many friends, supported the continuation of fly fishing and the practice of catch and release." 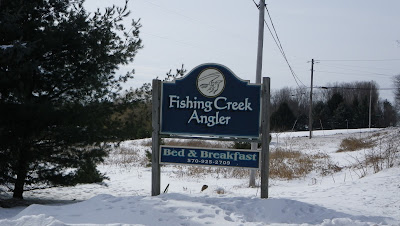 Over the weekend I went out to the Fishing Creek Angler B&B for a weekend of fly tying under the tutelage of a master fly tier by the name of Don Bastian. I have known Don for many years, fished with him a few times and spent many hours at his table at area fly shows chatting about traditional wet flies. He is THE authority on traditional wet flies and probably one of the best tiers in the world of these forgotten patterns.   Hatches Magazine has been showcasing some of Don's work with their feature on the Ray Bergman Collection.   This photographic collection of traditional wet fly patterns, recipes, and notes, when completed, will contain four-hundred eighty-three flies selected from Ray Bergman’s books.

Seven of us spent a weekend eating and drinking far to much and even managed to tie a few flies.  We actually did quite a bit of fly tying, much more than anticipated.  Our hosts Lee and Mary Ann at the Fishing Creek Angler were awesome and the accommodations were excellent.  I would highly recommend this B&B that caters to fisherman and features a full service fly shop.

I have always been fascinated and somewhat intimidated by these beautiful flies. I am still fascinated but no longer intimidated, with the knowledge gained this weekend I will be spending a lot of time perfecting traditional wet flies. 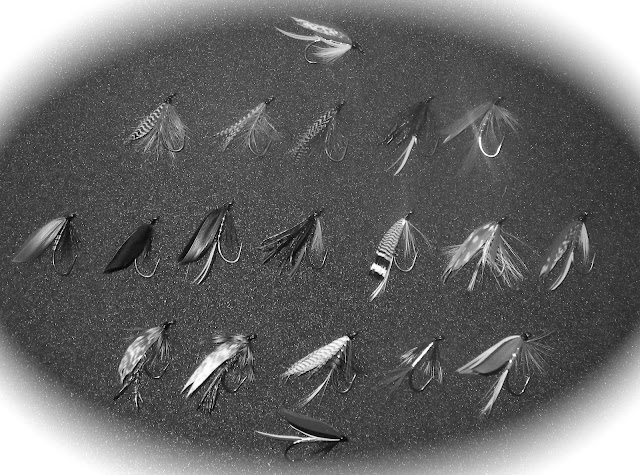 At long last I finished this project.  I have been meaning to do this for years and a recent article in by Dave Hughes in Fly Fishing and Tying magazine gave me the incentive to get off my butt and get it done!  His article supplied a great checklist that I used as a starting point for putting together my kit.   Since it is a long list I put it up in the pages section of the blog see it here.  I'm sure I will tweak this along the way and I will update the list as changes are made.  Check it out, and as always your comments and suggestions are encouraged.
0 comments
Labels: fly tying


The folks from the Clean Angling Coalition sent this to me and I thought I would share it. Aquatic invasive species cause both economic and ecological damage in waters around the world.  Invasive species continue to spread to new waters despite general awareness about them.  This is likely because many people don’t know what actions to take or how to help. The most effective way to prevent the spread of invasives is to Inspect, Clean and Dry all gear.

Press Release for the Gear Shower:

February 3, 2011 – Livingston, MT.  Cleaning gear is one of the best tools we have in preventing the spread of aquatic invasive species.  Recently the Waterworks/Lamson, an innovative fly fishing company, released the Gear Shower™ which helps anglers clean their gear stream-side after a day on the water.  The Waterworks/Lamson is an active partner in the Clean Angling Coalition an effort that works to promote Inspect, Clean and Dry practices to prevent the spread of invasive species.

“We are happy to offer a product to anglers that makes cleaning a simple part of each fishing day,” says Ryan Harrison President of the Waterworks/Lamson.

The spread of aquatic invasive species (AIS) from one body of water to another is a serious and growing ecological problem. Once an invasive species is established in new water, it can be impossible to eliminate. The method recommended by experts is to rinse gear after fishing at the take-out so that the AIS are not transported away from the site. And that’s where the Gear Shower™ can play a positive role. Fill the Gear Shower™ with tap water from home and use it to rinse away all visible material from gear at the take-out.

“We are thrilled to see this kind of product innovation and availability for anglers,” praises Leah Elwell Program Director of the Clean Angling Coalition.  “The Gear Shower™ is a positive way to help engage anglers in the fight against invasive species.”

The Gear Shower™ is very easy to use: lower a vehicle window an inch or more and hang the shower. Tap water gravity-fed flows through a shower head with on/off switch, allowing for the 2.2 gallon capacity to clean boots, waders and other gear. Gear Shower™ retails for $49.95 and one dollar from each sale of Gear Shower™ will go to support the Clean Angling Coalition in their efforts to promote clean angling practices.

Recipe:
Hook:  Standard Nymph Hook size 14 or 16
Thread:  8/0 black
Tail:  Black and white barred feather fibers like teal or gadwall flank feathers, even finely barred grizzly hackle will work in a pinch
Ribbing: Small silver wire
Abdomen:  Black synthetic dubbing
Thorax:  White ostrich herl
Bead:  Black (glass, brass or tungsten)
I have only been fishing this nymph for a few seasons but it has produced well.  I would categorize it as a general attractor nymph since it does not really imitate any specific food form.  The idea for the pattern came from flies like the prince nymph, I believe the contrast of the dark body and the white wings on that fly contribute to its effectiveness.  The contrasting black and white color scheme on this pattern maximizes that contrast..  I will often fish this fly as part of a team of flies employing various euro-nymphing techniques.
I usually tie the fly as indicated in the pattern recipe however on the fly pictured I tied it on a 2x short #12  Gamakatsu S10-2S hook.  It has the hook shank of a #14 but the hook gap of the larger #12.  This should improve the holding ability for landing the larger fish that live in my home stream.

Variation on a Theme...The Warmwater Chub

One of my favorite streamers for my local waters is Bob Jacklin's South Branch Chub.  Bob Jacklin resides in West Yellowstone, Montana and owns and operates Jacklin's Fly Shop.  Bob grew up in New Jersey and spent a lot of time fishing my home river the South Branch of the Raritan.  He developed a trim little streamer pattern called the South Branch Chub which proved deadly on this and other local rivers.  When he moved out west he took his patterns with him and they worked well in the Yellowstone region as well.

When I first tied this pattern it introduced me to a new fly tying material, Monga Ringtail.  Monga Ringtail is a wide striped (bared black & white) tail with average hair length of about 2".  It makes for outstanding streamer hair wing flies.  The fur is fine, easy to work with and has great action in the water.  The length of the hair it limits its usage to smaller streamers, which is possibly the reason it is not more popular as a fly tying material.

One of my most effective streamers last year for crappies and large mouth bass was a small streamer loosely based on this pattern. The fly retains the teal feather and black & white monga ringtail wing, but it is tied fuller and lacks the dubbing wax coating. The South Branch Chub is tied very sparse and the fibers are slicked back with a light coating of wax.  Changes were made to the body material, a red throat was added and doll eyes and an epoxy head replaced the fragile and expensive jungle cock.

I have never fished it as a trout fly but as a warmwater pattern it excels.  Pickerel, Bass and Crappie jump all over this streamer.

This year I have been tying this pattern substituting Clear Cure Goo for the epoxy and have found it to be a great substitute.  I like to give it a finishing coat of clear nail polish to avoid stickiness you sometimes get with UV cured products.
0 comments
Labels: bass, crappie, fly tying, patterns, pickerel, streamer, warm-water
Newer Posts Older Posts Home
Subscribe to: Posts (Atom)