Batten Down The Hatches

Most folks from this area are familiar with the Ken Lockwood Gorge section of the South Branch of the Raritan River.  This famous (or infamous, depending on your point of view) section of this well known freestone stream, is undoubtedly one of the most popular areas to fish for trout in the Garden State.   One of the attractions to the Ken Lockwood Gorge area is the classic trout stream appearance.  This rugged section of river is strewn with boulders and contains great pocket water and pools.  Prior to the infestation of the woolly adelgid, Hemlocks lined the banks providing year round cover.  Now, only the grey skeletons remain and surviving Hemlocks look like they are hanging on by a thread.  If you blindfolded someone and took them to this place they would never guess they were in New Jersey when the blindfold came off!

But this is not the gorge or the river I am writing about today.  The Musconetcong River also has a gorge section and this area is even more spectacular than the Ken Lockwood area, with two to three times the flows of the South Branch of the Raritan.  This area was  part of a private holding for decades.  Today part of the area is still owned by a private cooperation and some of it is owned by the state.

At the head of the gorge lies the thirty foot tall Warren Glen Dam, the highest on the river.  At the present time access to the area is difficult at best and the fishing poor to marginal.  The river here does not receive stockings so the few fish on this section of river are most likely from wild stock.  So what's the big deal you ask?

Talks have been underway for some time to remove this dam and restore the area to its natural state.  Removing the dam which has thirty feet of sediment behind will be a major undertaking but the potential is there restore the rest of the gorge to its original state.  That combined with better access could make this one of the best trout waters in the state!  This is a project that is still many years out but it is moving forward, definitely one to watch.  Perhaps one day in the not so distant future we will have another classic gorge area to fish in New Jersey.

As you all know this blog has recently gone through a long dry spell.  So it was particularly frustrating when I hit the river on Thursday hoping to put together a photo intensive post on fall wet fly fishing and this is what I get when I turn the camera on… 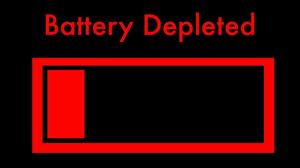 Now I know I put the battery in the charger the night before so I was a bit puzzled.  The mystery was solved when I arrived home that evening.  Battery chargers tend to work best when plugged in.  A little tip from the Jersey Angler.
4 comments


Central Jersey Trout Unlimited, along with several other T.U. Chapters and partners, recently worked on a planting project on the Musconetcong River. The project location was on a state owned Wildlife Management Area  just upstream of the Asbury dam. This area is impaired by eroding banks, lack of riparian cover, storm water runoff issues, water quality pollution such as fecal chloroform from sources such as dairy cows in the river or its tributaries as well other problems.

About fifty volunteers from several organizations and schools, including some folks as far away as Colorado participated in this event.  In record time, holes were dug and 150 containerized plants and trees were planted.  After the planting all of the new backside residents were caged or covered with netting to ward off the hungry resident deer and beavers.  This work will go a long way to enhance the ripariarn cover on this section of river.


It was also a great way to introduce some children, including my oldest, to some conservation work and some good old back breaking manual labor.  They took to it like a duck to water, and thoroughly enjoyed the experience!


Many thanks to all the volunteers who gave up part of their weekend to give something back to the river!

Fall Issue of Southern Culture on the Fly is in your electronic newsstands now!

Southern Culture on the Fly 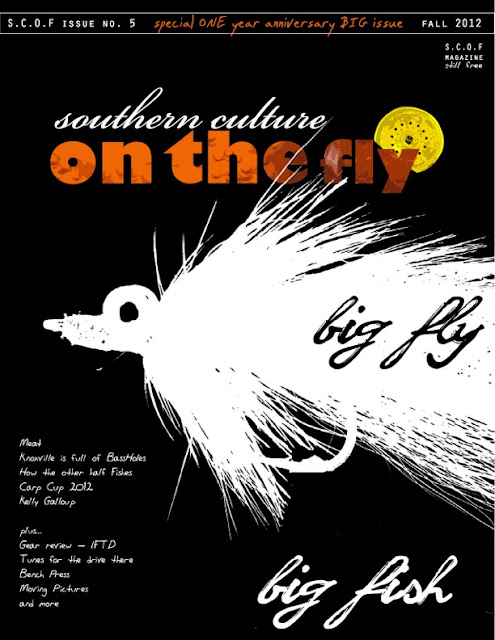 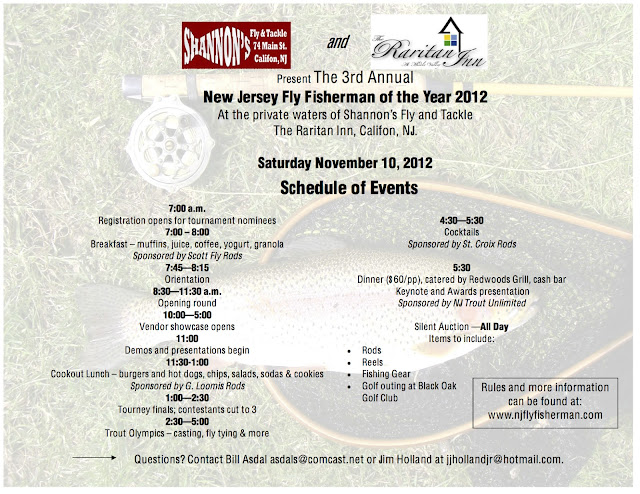 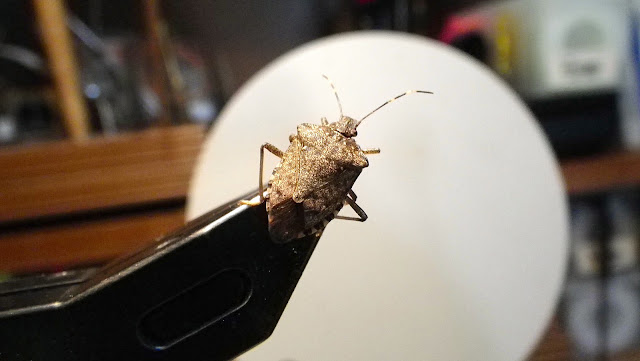 It's that time of year again.  The days are getting shorter, the nights are getting cooler and the stinkbugs are getting into everything!  This is a relatively new phenomena for us here in New Jersey.  Over the last few years these little odorous bastards invade our homes by the score when the weather turns cool.  Your home can be sealed tight as a drum and they still find their way in.

Apparently they have few natural predators because of their highly effective self defense system.  The exception appears to be my golden retriever, who seems to be fond of them but that dog has never been quite right.  Dog breath is bad enough, essense of stink bug on dog breath brings things to a whole new level.

This fellow on the vice has me thinking…I wonder if trout can smell?
2 comments

Orvis, TU begin project to open 1,000 miles of water over next decade

MANCHESTER, Vt.—Orvis and Trout Unlimited this week announced the first two streams that will be improved to allow better passage for wild and native trout as part of the new Orvis / Trout Unlimited  “1,000 Miles Campaign.”

Murphy Brook in Vermont and Tabor Brook in New Hampshire—both tributaries of the Connecticut River system—will be the first beneficiaries of funding raised by Orvis and its customers, and TU will oversee construction and reconnection projects on both streams.  Migration-halting culverts will be replaced, and dozens of new miles of habitat will be available to brook trout and brown trout that need intact coldwater habitat to spawn and to escape the worst of summer’s heat.

Thanks in part to an Orvis grant and matching funds from the company’s customers, the two entities hope to open up 1,000 miles of new coldwater habitat to trout and salmon all over America. Many streams with spawning and rearing potential—and fishing potential—are now blocked by faulty culverts and other man-made barriers. The campaign’s goals include not only increasing overall trout habitat from coast to coast, but improving fishing opportunity resulting from stream improvements.

“Opening up 1,000 miles of new habitat for trout and salmon over the next 10 years is an ambitious goal, but we think we can do it,” said Elizabeth Maclin, TU’s vice president for eastern conservation. “We’re lucky to have dedicated partners like the people at Orvis—they’ve always been very supportive of the work we do, and their commitment to this project means the world to us.”

By opening up habitat in Murphy Brook and Tabor Brook to migrating fish, anglers will likely see improved fish numbers in downstream stretches of water, and enjoy more fishable water in the coming years. Two culverts will be replaced on Tabor Brook this fall, and work to remove a culvert that blocks upstream migration on Murphy Brook will begin later in the year.

The 1,000 Miles Campaign will help fund culvert removal projects on several other trout streams located all over America. These streams are:

“Culverts are significant impediments to fish passage and survival – just as significant as a major dam – but the solution is dramatically simpler, costs less, and the overall benefits to many watersheds is profound,” said Dave Perkins, Vice Chairman of Orvis. “By removing these impediments, we not only add vital habitat for fish, but we also open many miles of fishable waters for anglers.  We’re proud to partner with TU in this effort to engage the fly-fishing community in support of this often overlooked opportunity to dramatically improve fish habitat across the country.”
2 comments

I just finished reading the latest edition of Catch Magazine. Another great issue! Check it out.

- Posted using BlogPress from my iPad 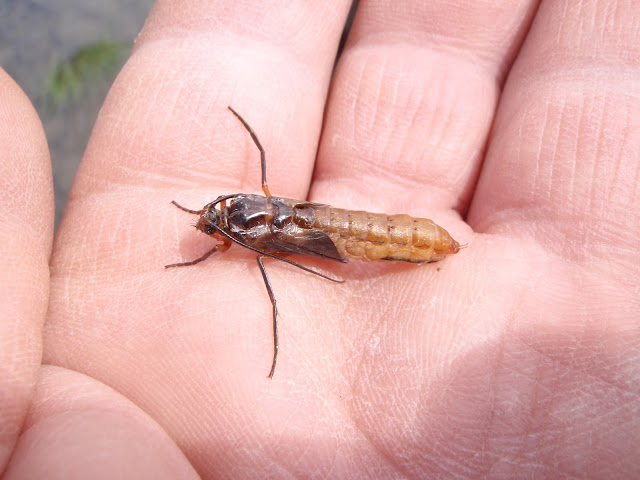 In my neck of the woods the October Caddis is a sporadic hatch at best.  Fortunately it is a big bug that gets the attention of trout.  It is my understanding that the insect hatches at night or in the early morning, which may be the reason I don't see it often. Once school starts for the kids, I will seldom be able to get on the water before 10:00am on a weekday.

That being said, I do have quite a bit of luck with pupae patterns that represent this insect.  The version I have tied here is not an original pattern but a replication of a commercial one I picked up years ago. It worked well then, so I faithfully reproduced it and have been tying it the same way ever since.

As a European nymphing enthusiast I like to fish this fly as an anchor fly.  With the low water conditions we find on our rivers in the autumn of most years the tungsten bead is all the weight I need to get the flies in the zone.  Since I am using it as an attractor pattern I brighten up the colors a bit, and it works well for me.  The naturals are more of a dull orange, tie them that way if you are looking for a more realistic pattern. 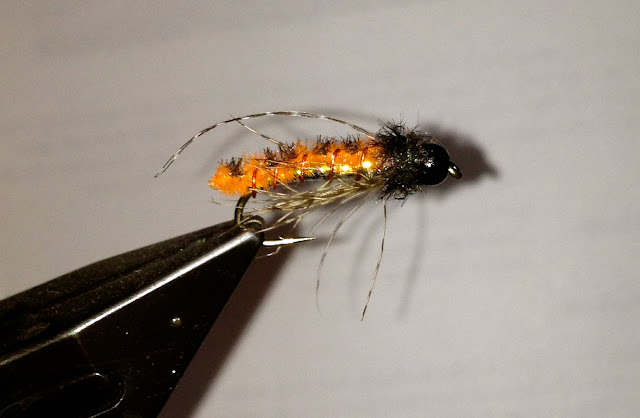 After a long siesta things will be ramping back up here.   It was a very busy summer but things have slowed down and there is finally some time to actually do some fishing and with that some writing.
0 comments
Newer Posts Older Posts Home
Subscribe to: Posts (Atom)