I recently wrote something about an evolution of this fly that became a very effective warm water pattern.  Not that there was anything wrong with the original, it just sorted morphed over the years into something else.  But it did get me thinking about the fly, how I came to discover it and the number of trout it has caught over the years.

Many years ago I picked up an old aluminum fly box that contained many examples of one fly, the Crackleback.  The original owner was obviously quite fond of this pattern, he (or she) liked it enough to fill an entire fly box with the same fly!  At some point in time, I fished one of those Cracklebacks and caught a fish.  I caught enough fish with them to start tying the fly myself.  It was one of those patterns that I would tie on the end of my leader when nothing else was working.  I was surprised when they caught fish, but secretly always expected that it would work.  The funny thing is, it was never a pattern I would start off with.  There were always so many other sexier flies to fish.
Why do they work?  Beats me, but work they do.  The fly was developed by Ed Story of Feather-Craft in the 1950's.  His one-liner in the catalogs, "Expect near instant success" always cracked me up, but the pattern does indeed work.  Maybe it is the fly's versatility, it can be fished as a dry, swung like a wet, dredged like a nymph or stripped like a streamer.  At least that is what the originator claimed.  Truth be told I have probably caught fish all using all four methods.  I have had my most success with the pattern during caddis emergences.  On these occasions, I would begin by twitching the fly on the surface, letting hang in the film at the end of the drift, then jerking it under the surface and using a hand twist retrieve bring it up stream for a few feet before picking it up and casting it again.  It would take fish dead drifting, swinging and moving up stream.  One of the best evenings I have ever had on the water was fishing this fly over ravenous rainbows and browns during an evening caddis hatch on the Madison River in Montana.  It took fish on nearly every cast!  My friend Rick enjoyed the same success fishing just downstream of me using an Iris Caddis, so maybe it had nothing to do with the fly.  I like to think it did.


Just for the hell of it, I fished it as a nymph last week on my first outing of the year.  While other nymphs were far more productive,  a big rainbow which was one of a few doubles caught that day, fell for its charms.  The fly should not have worked, as all the other fish caught that day were eating small euro style nymphs, but it did!

These flies are simple to tie and can be fished in a variety of ways.  They can be tied in various sizes and colors to imitate nearly anything. There is no reason not to try them.
0 comments
Labels: crackleback, winter fishing 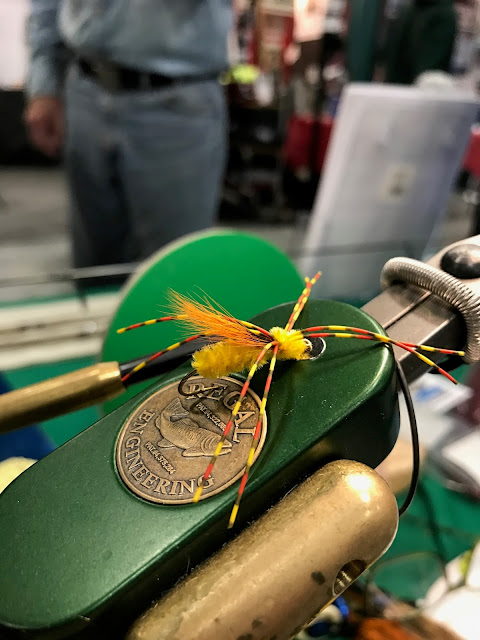 Here is your weekly warm water fix from the Panfish On the Fly - The Bream Killer.
0 comments 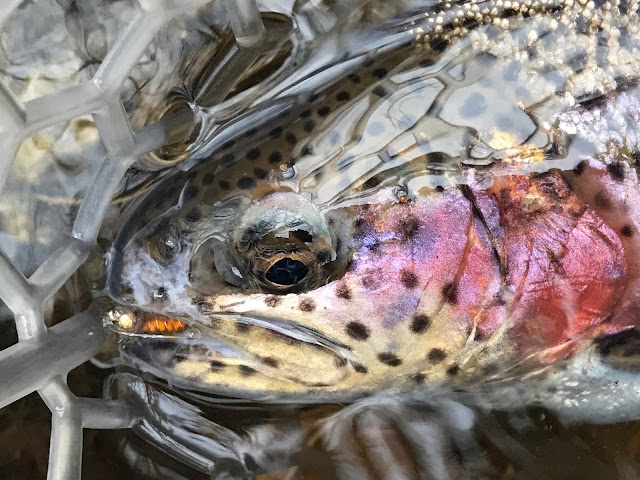 This chunky rainbow was my first trout of 2017.  It was a great afternoon on the water today.  The air temperature was in the mid-40's, the water temperature neared 40 degrees and the fish were actively feeding.
0 comments 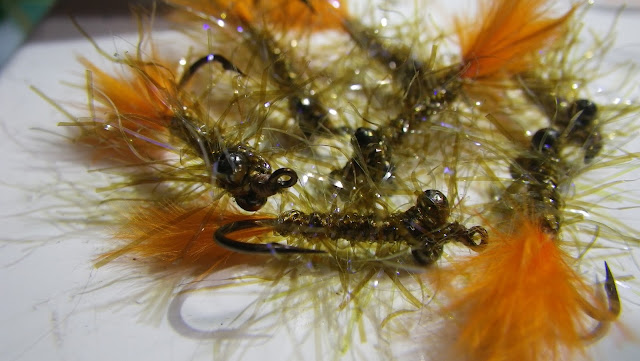 I'm in the process of restocking last season's fly boxes and I am working through warm water boxes at the moment.  This pattern was a big producer last year.  I wrote about it on The Panfish On The Fly last year and thought I would share it here.

It's no secret that bluegills and other members of the sunfish family are attracted to color.  The exact color that turns them on may vary from day to day or even hour to hour.  In my neck of the woods, orange is a long standing favorite day in and day out.  This particular pattern was created during a tying session when I was refilling one of my still water, trout boxes with damselfly nymph patterns.  I had just finished tying a few dozen damsel fly nymphs for my annual pilgrimage to Grebe Lake in Yellowstone National Park.  My tying desk was littered with 2x long nymph hooks, bead chain eyes and material I was using to add legs to a new damselfly nymph pattern I was experimenting with. Truth be told,  I could have continued tying the same pattern and throw some in my panfish box and call it a day.  Damsel fly nymph imitations are some of my most productive subsurface bluegill flies.

I had something different in mind.  I wanted to add a little bit of color on the fly and change up the profile a bit.  The olive marabou tail was replaced with a small tuft of UV orange marabou.  The slim marabou dubbed body was replaced by winding the polar chenille material I was using to imitate legs on the trout patterns.  The result was a fly that was incredibly easy to tie, had a bright spot of color at the business end of the hook, had just enough weight to break the surface tension of the water and enticingly sink to the bottom and created a lot of movement in the water.  The UV olive brown polar chenille created a fly with lots of leg-like appendages that move in the water even when the fly is slowly sinking or at rest.  Every twitch of the line brings the fly to life.  In addition to being an attraction to the fish, the orange tail works like a strike indicator under some conditions.  Panfish can be masters camouflage at times. In waters with certain bottom types, they are damn near invisible. Fortunately, over those same bottoms, the orange tail of this fly glows like a beacon.  I had often detected strikes when the little spec of orange I had been staring at just disappeared.  When that occurs, it is usually because a fish approached the fly from behind and sucked it in without grabbing it and running off.  If I did not set the hook at the visual clue, the fish would have likely rejected the fly a split second later.  If I were not able to see that little spec vanish before my eyes, I would not have been able to pick up on the hit.  Crappies are masters of this method of feeding.  Time and time again I have seen them take these and other flies and have never physically felt the taking of the fly.


Many of my bluegill sub-surface patterns are tied on 2x or 3x long hooks.  I find that a longer hook helps when releasing the fish.  Bluegills and sunfish have minuscule mouths and removing a deeply set hook, often results in injury to the fish.  A longer hook often will be easier to I dislodge even when taken deeply by the fish.  The 2xl hook on this pattern fits the bill perfectly.

I have experimented with other colors for the body and tail, and all have worked well, but the olive brown/orange combo is my by far my favorite. 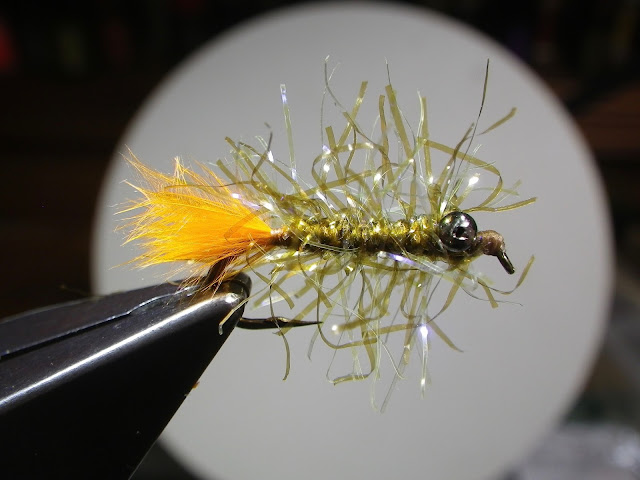 Do you want to learn how to tie flies? 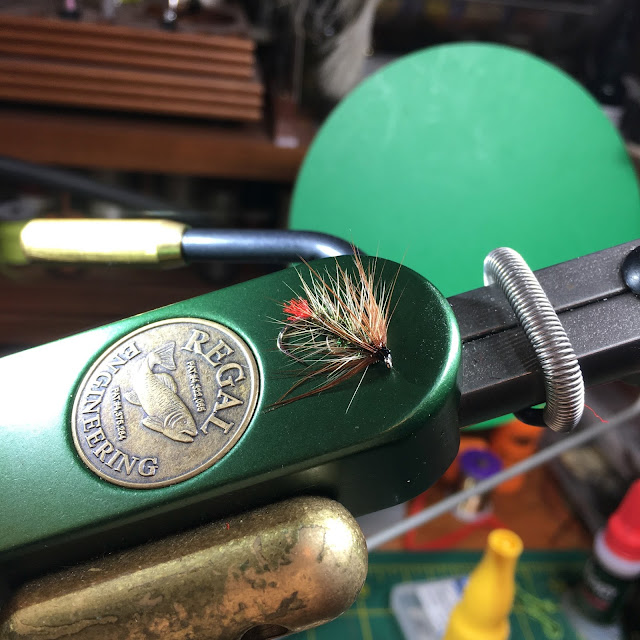 Central Jersey Trout Unlimited is offering fly tying classes for fly tiers of all experience levels. They are offering a beginner's class as well as an intermediate/advanced class for more experienced individuals.

For the beginner's class, all tools and materials will be provided. Individuals taking the intermediate/advanced class will need to have their own vice and tools.

Cost of the beginners class is $75.00 (all tools and materials provided)
Cost of the intermediate/advanced class is $50.00

For more information or to register please visit http://cjtu.org/tyingschool.html