You don't see these too often... 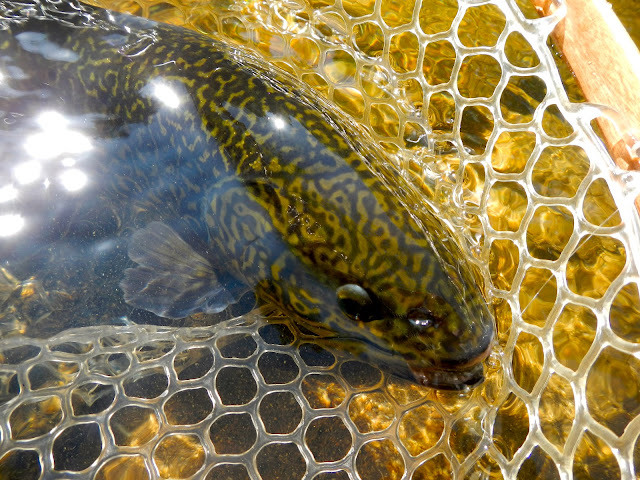 The first 800 - Win a Thomas and Thomas Fly Rod

The first 800 Thomas and Thomas is looking to expand their footprint in the world of social media. Visit the link above and follow the instructions to throw your name in the pot for a new fly rod of your choice. All you need to do is follow them on Twitter, like um on Facebook or subscribe to their newsletter. Easy as pie!
0 comments

The Not So Super Ant


Two summers ago I put up a post about a simple terrestrial pattern dubbed the super ant.  The super ant is a ungainly creation consisting of just three materials - foam, hackle and thread. It was a creation of my buddy Rick, during a late night tying session in our West Yellowstone cabin, fueled by one too many servings of "cabin punch".  This jumbo sized attractor pattern scored big time on fish in the West Yellowstone area.  The browns on the meadow section of Gibbon River fell particularly hard to its charms.

When I brought the pattern home to New Jersey it worked well most of the time for warm water species, but our trout here on the east coast sometimes cast a suspicious eye upon the pattern. They would often rise to inspect the fly, sometimes following a good distance downstream, before ultimately refusing the offering. They were definitely interested, but there was something about the pattern they were not sure of.

As it turns out, it appears that the "super" in the super ant was turning fish off.   Downsizing the pattern has made it much more effective on our east coast trout.  It has also greatly improved its hooking abilities on small mouthed panfish as well,  which sometimes had a little difficulty choking down the original pattern.  The sample pattern I was given was tied on an old, discontinued Mustad barbless hook (3257B). It just so happens that I have thousands of these funky, old irons lying around. This hook was supposedly discontinued because of its poor hooking abilities. Although the hook held well, it was said to have penetration problems due the pronounced hump in the point. I have used the hook for a while now and have not observed any issues with penetration, so I am continuing to use it (I have to do something with them).  Another option in the same style of hook would be the Partridge Roman Moser (CS27) barbless dry fly hook (also discontinued, but easier to find). In the end, any old dry fly hook, barbed or not will work just fine. 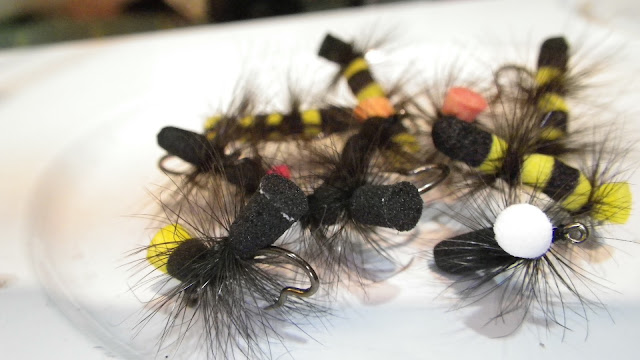 This batch was tied up using some quick sight ant bodies I had lying around.  To get the hi-vis indicator tips, I simply tinted the white sections with permanent markers in various colors. The standard white works well enough but in some light conditions a little bit of color improves visibility on this low riding pattern. 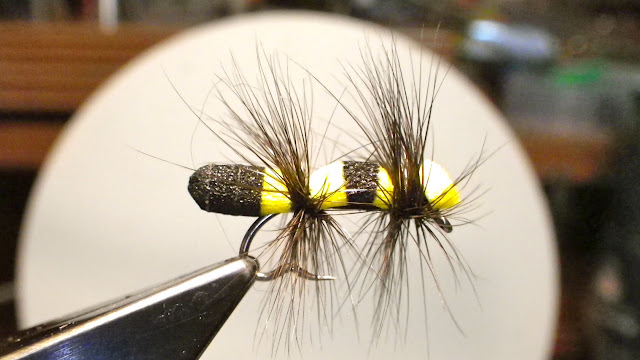 In addition to the not so super ant I also tied up a few not so super bees with some foam bee bodies I found lying in the same drawer. I have a feeling the bluegills are going to tear these up! 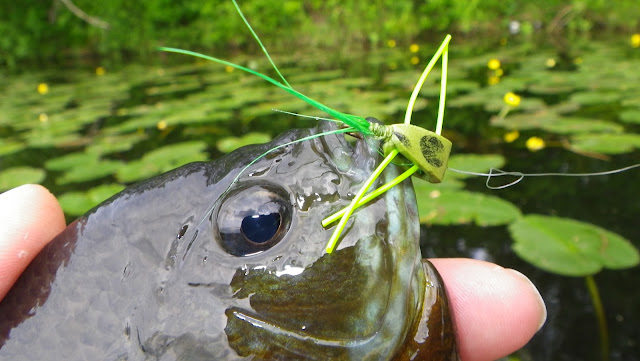 The Sulphurs are Flying! 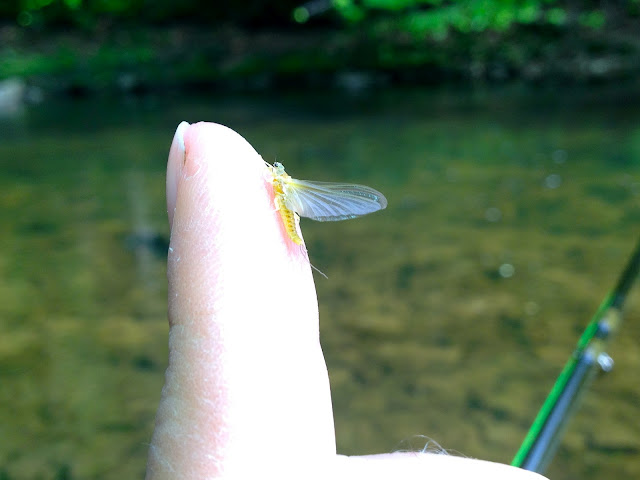 Just a quick post for the local folks.  The Sulphurs have been around in dribs and drabs for a few days now, but last night they were out in numbers that had the fish looking up!   The bug pictured was on the small size most were considerably larger (as large as size 12!).  The fish ate good last night! 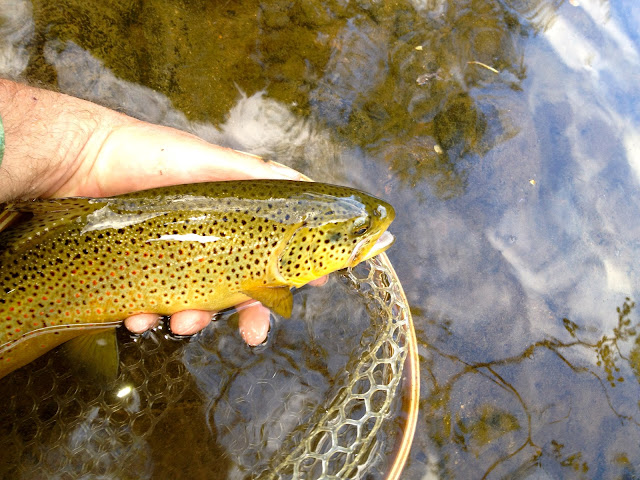 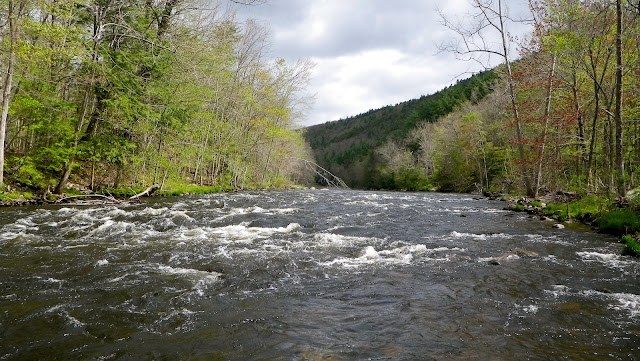 I recently took trip to Connecticut's famed Farmington River with a group of friends.  We headed up to the river on the tail end of a nor'easter, so we had some adverse weather and water conditions to deal with.  Despite less than ideal conditions it turned out to be a great trip. 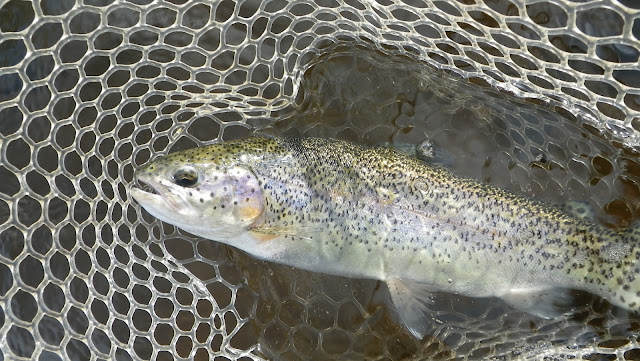 There were plenty of chunky little rainbows to be had.  They were everywhere and eagerly took our nymphs and streamers in the morning and rose to Hendricksons and caddis in the warmer afternoons.  The rainbows averaged 12 to 14 inches with the largest nosing up to about 16 inches.  They fought surprising hard for their size. 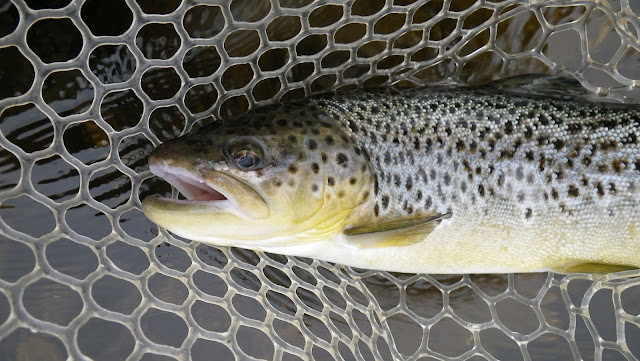 The brown trout averaged a inch or two less and were just as abundant.   I managed to hook a few larger browns in the 20" class, while fishing streamers in some of the deep runs and pools, but they got the best of me and never made it to the net. 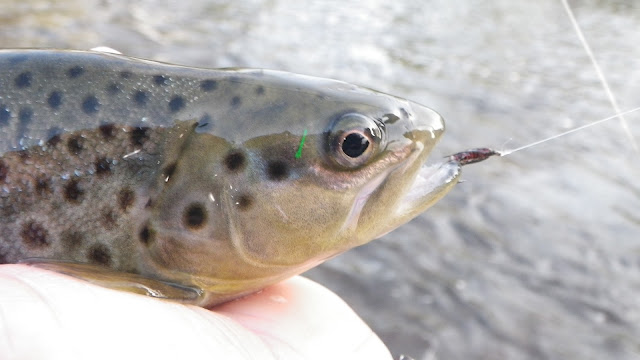 The fishery folks on the Farmington have an interesting way of tagging fish to identify when they were stocked.  The small recently stocked brown trout all had this green laser etch behind their right eye.  I have never seen this method of tagging before. 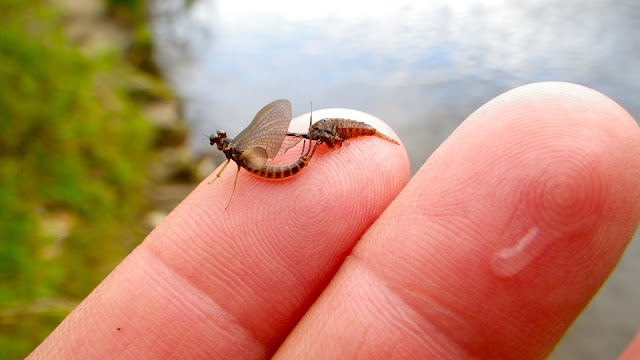 We managed to have one phenomenal afternoon when my buddy Rick and I got into a riffle that was just teeming with fish.  There were actually more fish in this one spot than I have ever encountered on a river before.  We discovered that they were staged in that riffle taking emerging Hendricksons.  Fishing soft hackles we took fish on almost every casts for hours right up until dark.  The numbers of fish caught was astounding, between the two of us it was one of those rare "100 fish days". 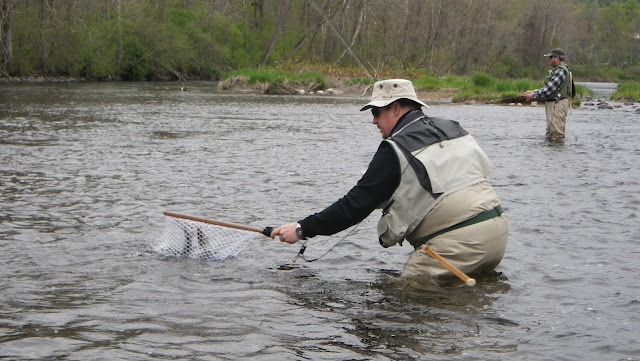 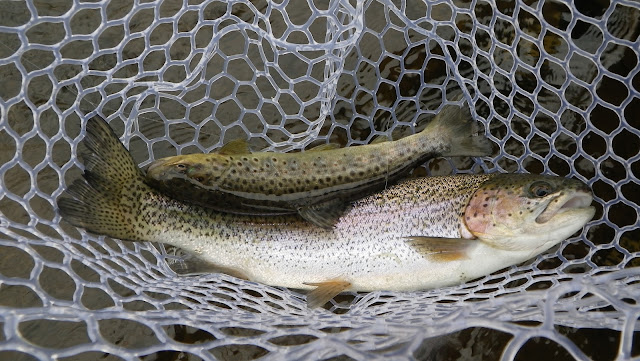 Fishing two fly rigs and catching two fish at a time was just as common as catching one!  More often than not, everyones rod was bent over at the same time.  Since we left fish biting the night before, we returned the next morning morning with another friend and found the fish there again.  This time they appeared to be taking spent little yellow crane flies.  A partridge and yellow soft hackle did the trick and we did it all over again.   This had been my first trip to the Farmington, I can't wait to head back!

Not your typical trout stream resident! 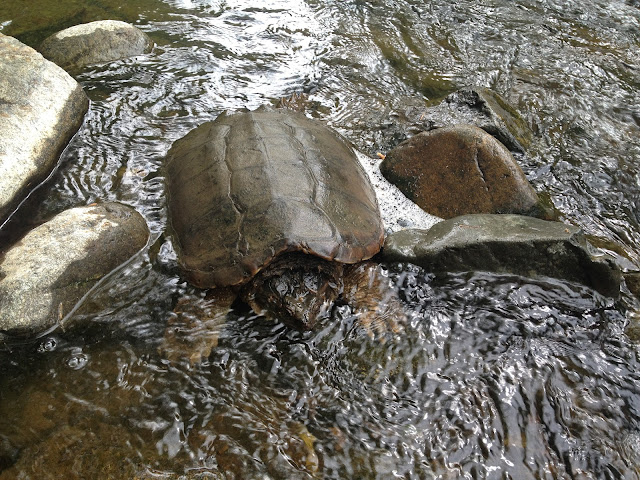 I was standing in the shallow water on the edge of the river, tying on a new section of tippet, when I felt something heavy climbing over my wading boots.  I looked down and almost jumped out of my skin when I saw this large snapping turtle clambering over my boots.  I had been standing motionless for a while watching a few rising fish on the opposite bank so I guess he figured I was part of the landscape.  Once my heartbeat returned to normal I left this fellow to his own devices and I proceeded to catch one of those rising fish. 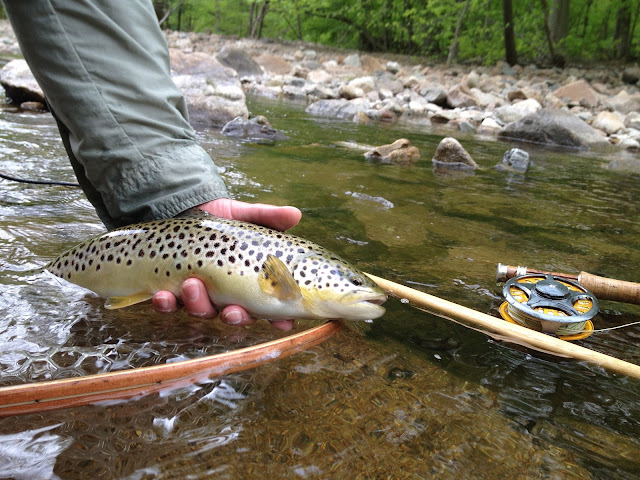