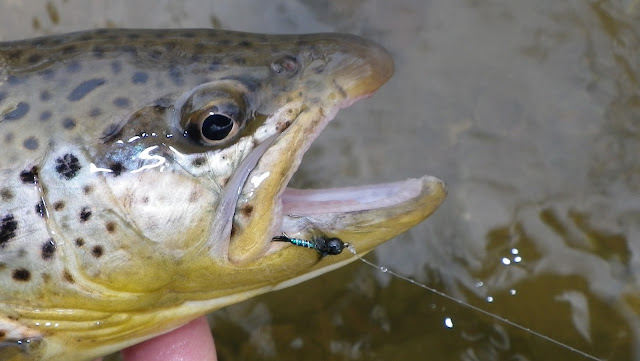 As promised,  here is a little more information on the this "new" pattern.  Last fall I started playing around with a few small dark colored generic nymph imitations.  Using Fly DK synthetic quill material as a abdomen allowed for a neat trim profile.  A little silver wire for ribbing, synthetic peacock dubbed thorax for a buggy apperance, a strip of mylar for the wing case adds a little flash and a black tungsten bead to supply the weight and the Little Dark was born.  This pattern has quite a bit of flash to it.  The Fly DK Pearl synthetic quill abdomen gives it iridescence and the silver wire and mylar wing case add quite a bit of sparkle.
The first two trips of the year as yielded excellent results for this new pattern.  The river at the time was seeing a lot of small black stone fly activity which may have accounted for its success.  I will have to see if it continues to produce through out the year. 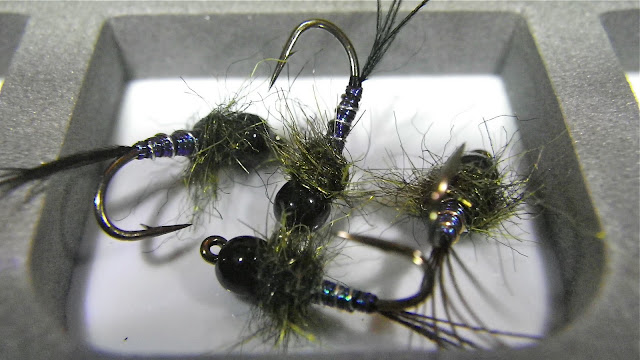 If you need a source for the DK synthetic quill check out Performance Flies.  Kevin is a great guy to deal with and has always been my source for this fantastic fly tying material.
4 comments
Labels: fly tying, nymph, patterns 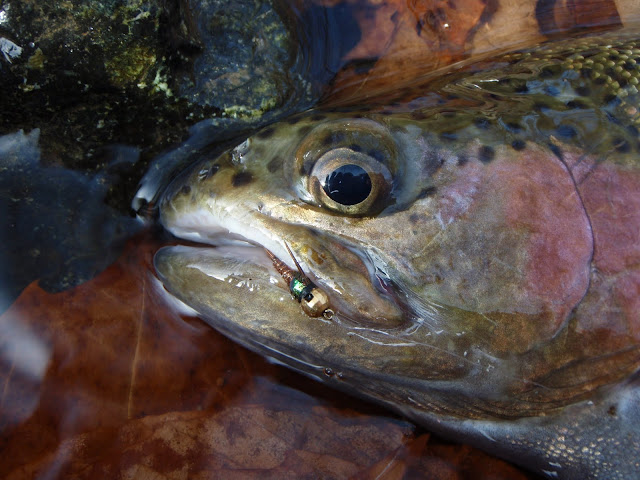 I thought I would share the details on this incredibly effective pattern.  I have mentioned it a few times on this site but have never really given a pattern recipe for it.  I am constantly amazed how well this disproportionate fly performs.  The tungsten bead on the head of this fly is three or four times the size it should be.

I tie it in two basic versions, one with a gold bead and one with a black bead and small orange hot spot.

I should mention that I mainly fish this fly as part of a Polish or Czech nymph rig.  With my normal three fly set up, this pattern would be tied in the middle or anchor position.  It is the heaviest of the three flies and helps bring all of the patterns down to where the fish are. 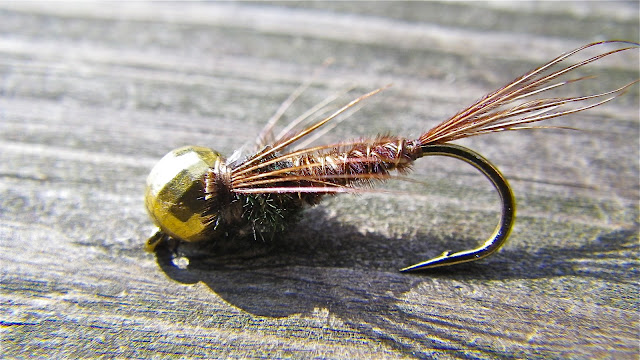 Last Day of the Winter Season 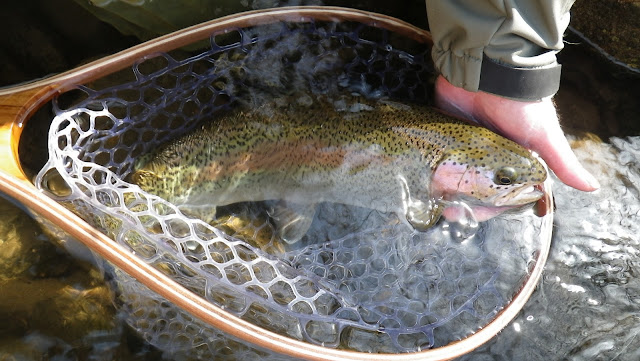 I was able to get out on Sunday, on the day trout season closed before the season opener on April 9th.  The weather was a bit more seasonable with the high just hitting 50 degrees.  The river was in great shape with normal spring time flows and good clarity.  It was all rainbows in the morning with browns becoming more active by mid day.

As usual for this time of year nymphing was the way to go, but the fish were more active, willing to move a bit more for the fly.  As on my previous trip the "spanker" was the bomb, with most of the fish taking this pattern.  This time I fished it on the top dropper so they were taking it higher in the water column. 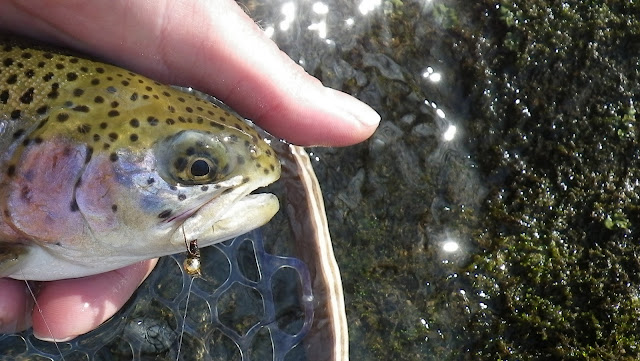 My pheasant tail anchor pattern with its giant over sized tungsten bead continues to rack up the numbers.  Why this fly is so effective is a bit of a mystery to me, as it produces well under all conditions.  I originally tied it to only act as weight to bring other flies into the zone, thinking the over sized bead would not be attractive to the fish. Either the fish don't notice the bead at all or they are actually attracted to it, the jury is still out on that one. 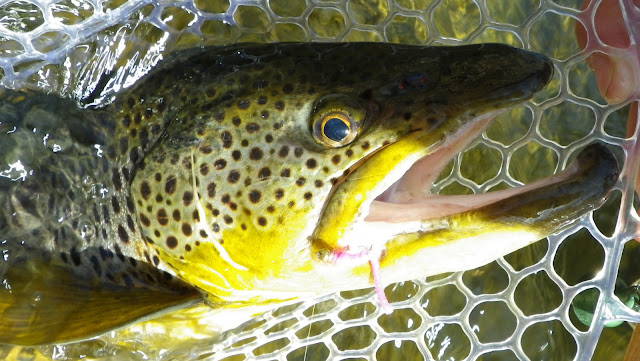 Another pattern that has been bringing up some nice browns has been a pink tungsten beaded San Juan Worm.  Rainbow trout don't seem to have any interest in this pattern but the biggest fish of the day (always brown trout) have been taking it. 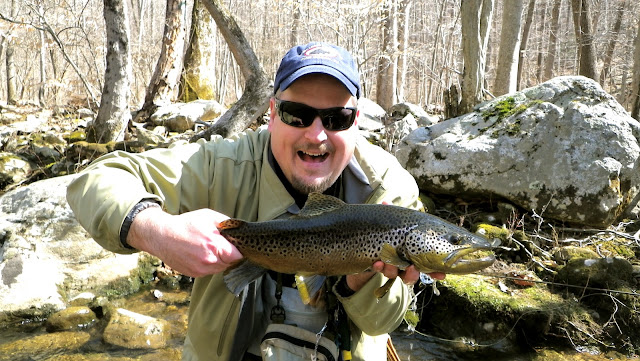 This chunky brown my buddy Rick caught is an example of the fish showing a preference for the "pinky".  This fly is tied a little differently than a traditional San Juan Worm.  In addition to the bead that is threaded onto the chenille before being mounted on the hook it has a thorax of shrimp pink vinyl d-rib.  I don't know if adds effectiveness to the pattern...it works so I'm not changing it. 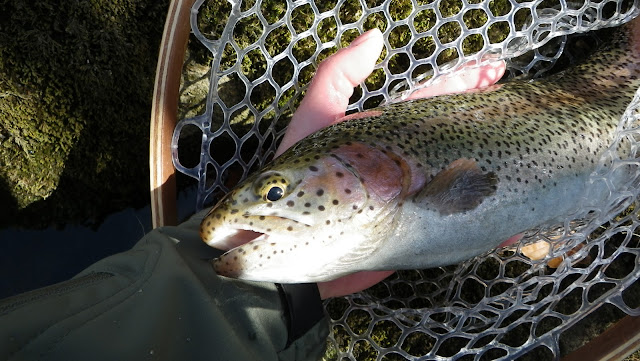 The vast majority of the fish caught where rainbows and I did see some sporadic takes on top as fish were feeding on the abundant stone flies and midges that were flying about.  I think the reason the Lil' Spanker was working so well on the top dropper is that fish were taking it as a sunken adult stone fly.  Most of these stone flies were returning to the water to lay eggs so I imagine a number of them were ending up in the drink. 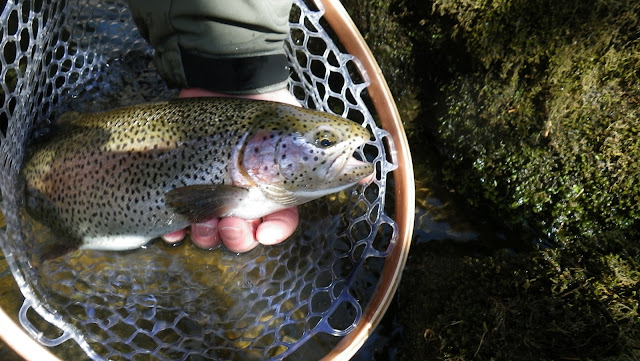 Nymph fishing was so effective I never bothered going on top.  In fact I ended up with two back to back doubles which has never happened before.  Four fish on two casts! 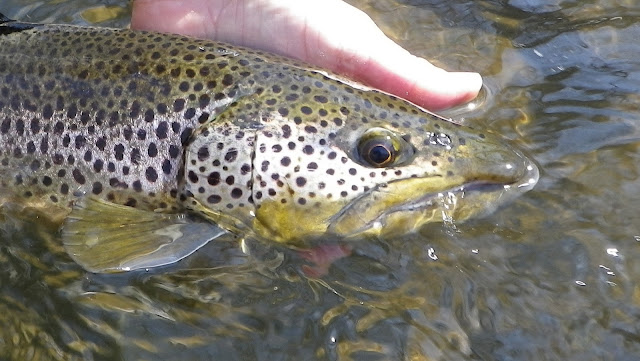 By the end of the day arms were tired, flies were chewed to shreds and there were loads of fish caught with a few real good ones in the mix.  I hope the season starts as good as it ended!
0 comments
Labels: fly fishing

Winter is Finally Over!

This was a long tough winter for me.  In a normal winter I will usually get a dozen or more trips under my belt before the season closes before opening day in early April.  This year it was looking like opening day would be my first time on the water.  As luck would have it last Friday my scheduled cleared at the last minute and I was on the water by noon.  The weather was unseasonable warm but the water was high, just coming down from flood stage earlier in the week.  Not perfect conditions, but with the season closing in two days there really wasn't another choice. 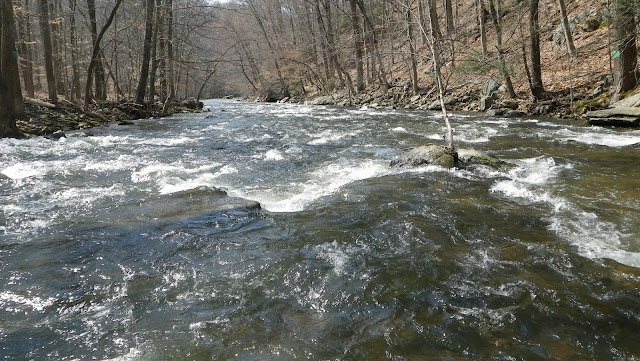 The day started a little slow but as the water warmed the fish turned on.  It was a Czech nymphing game as the high water had the fish pushed to the banks and in the softer water around the breaks, but the fish were there and they were eating.  The high roiled water allowed you to fish close most times not even getting your feet wet. 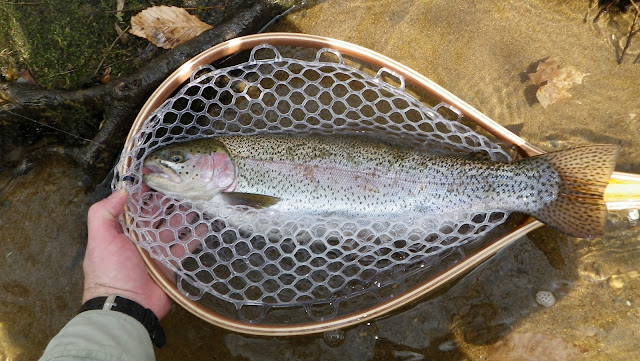 The fish were in great shape and looked like they passed through the winter in grand style. 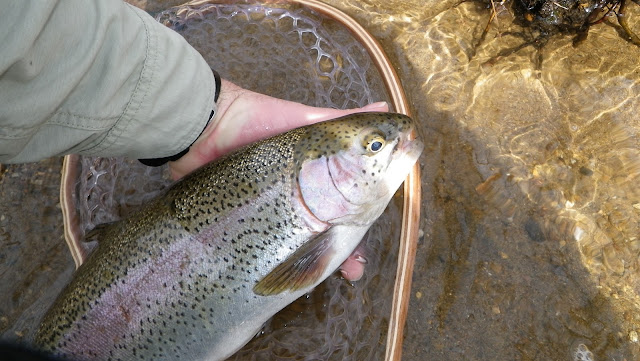 Most of the fish were rainbows, but as the water warmed the browns started to wake up. 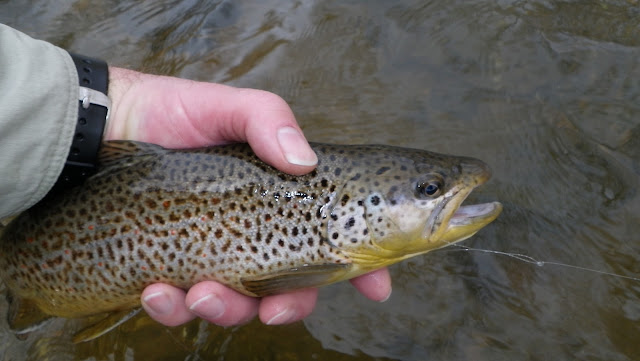 This is a new pattern this year and it produced very good.  I'll put up the pattern recipe in a few days. 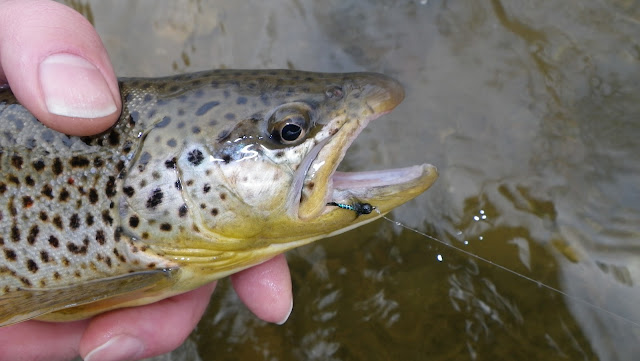 The fish of the day was a big hen brown who ate the fly right on the bank in front of a log. 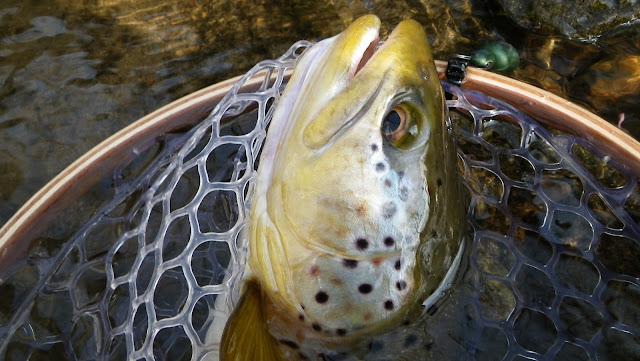 With any luck there would be one more trip out before the season closed Sunday night...
3 comments
Labels: brown trout, czech nymph, fly fishing, rainbow trout

I'm away on business and have a few hours to kill each afternoon. The portable tying kit is a pleasant distraction and is keeping from blowing my hard earned money in the casinos.

I have been reproducing a simple stone fly soft hackle pattern I found in the jaw of a 22" brown trout I caught over the weekend. Thanks to whoever was the original tier of this obviously effective pattern. A simple, impressionistic pattern that had obvious appeal to at least one big fish. I'll let you know if it works for me...

- Posted using BlogPress from my iPhone 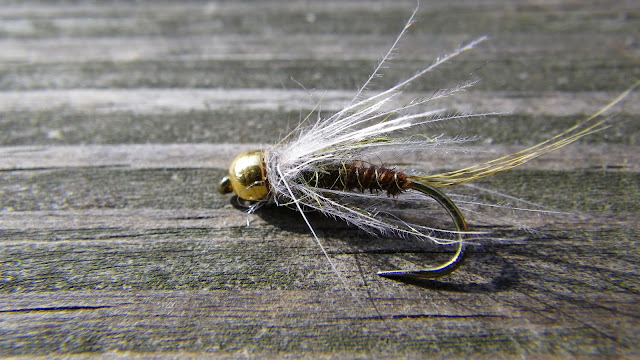 If I ever cross paths with Ben Romans I am gonna buy that man a beer!  I have been working my way through his book Montana's Best Fly Fishing.  In his section on the Madison River he mentions this fly.  I tied up a dozen and got them wet this weekend.  This pattern out fished everything else I fished two to one so it has earned a permanent spot in my box.  You can find a review on the book on the Chronicle Outdoors blog.

Here is the pattern as described in the book. 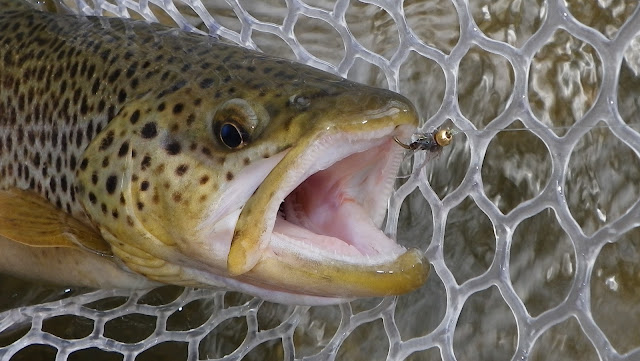 Last Thursday I received a little gift from Cameron of The Fiberglass Manifesto blog.  Within 5 minutes of opening the package it had found a new home.  I love the new logo and I think it looks pretty damn cool on the back of my ride! 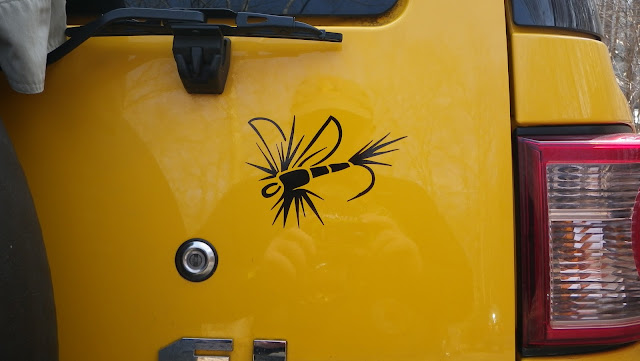 Finally made it out on the water today and these were the top producers of the day.  The second fly from the top was a new fly (for me) and really produced well.  You'll have to wait a day or two for the details... 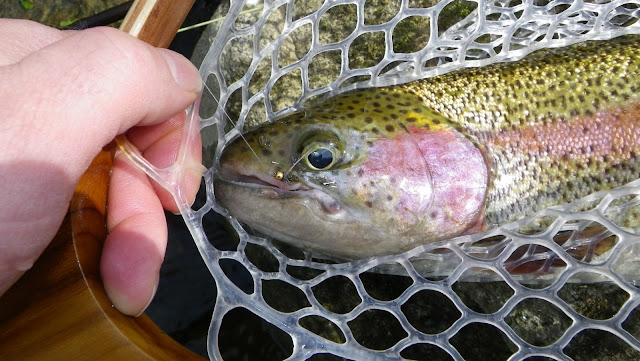